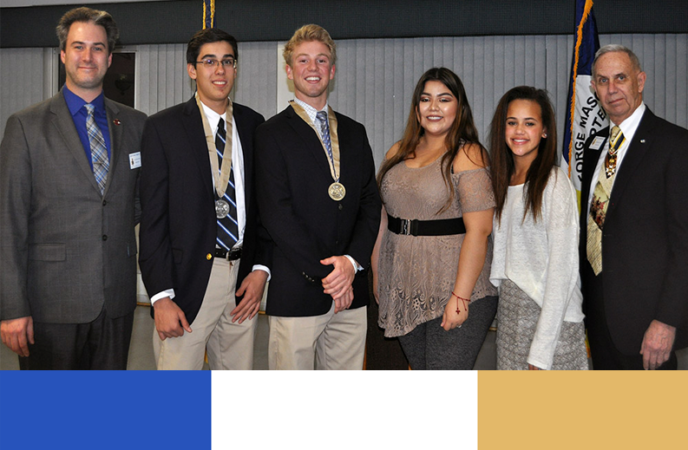 At the January meeting of the George Mason Chapter of the Virginia Society, Sons of the American Revolution, chapter president Pete Davenport presided over the conferring of several awards to chapter members. Before the awards, the chapter’s Chairperson of the Joseph S. Rumbaugh Oration Contest, Compatriot Keith David Reeves, presided over the annual competition, featuring local high school students. Past President Al Lewis, Secretary Ken Morris, and Past President Bob Shumaker served as adjudicators, and Color Guard Captain Compatriot Johnson served as timekeeper. 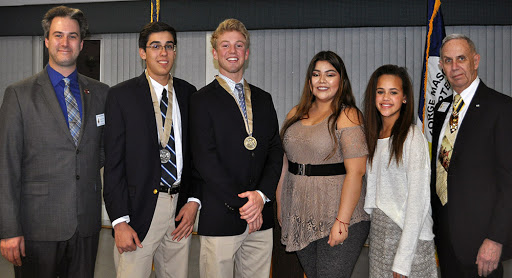 This year’s winner of the contest was Seth Viani from Bishop O’Connell High School, instructed by teacher Ms. Mary Lou Wentzel, a long-time supporter of the George Mason chapter’s annual contest. Mr. Viani has accepted an appointment to the United States Naval Academy, where he will attend next year. He is pictured below receiving his award from President Davenport. Mr. Viani’s oration was titled The Greatest Failure of America, and remarked upon the collapse but lasting influence of the Articles of Confederation, and the important lessons to be learned from studying one of our Revolution’s prototypical documents. 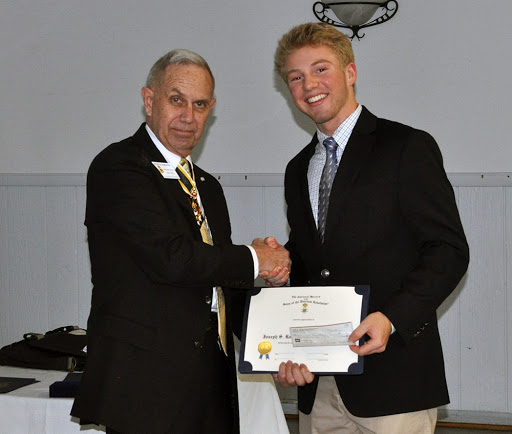 Also honored were placing oration competitors Anja Klein, a Freshman at O’Connell, and Victoria Revollo, a Junior at O’Connell – pictured below, respectively – both of whom have aspirations to enter business as independent entrepreneurs. Ms. Klein spoke on the Sons of Liberty, highlighting the efforts and strategies employed by the Massachusetts colonists during the nascent Revolutionary period. Ms. Revollo presented a biographic sketch of Nancy Morgan Hart (1735-1830), a Georgia frontierswoman who became a folklore hero of the Revolution as a spy and for her actions in personally defending the South against the abuses of British forces. 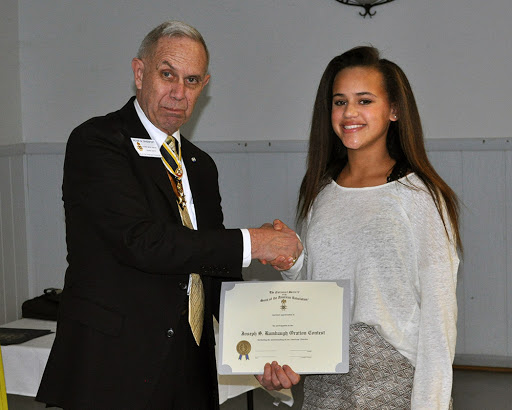 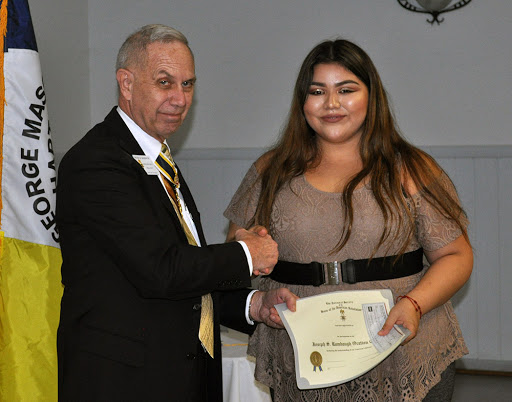 The Chapter was further honored by having our winner of the George S. & Stella M. Knight Essay Contest, Ryan Bhojwani, read his piece. Below, President Davenport confers the award for his work upon the aspiring scholar. 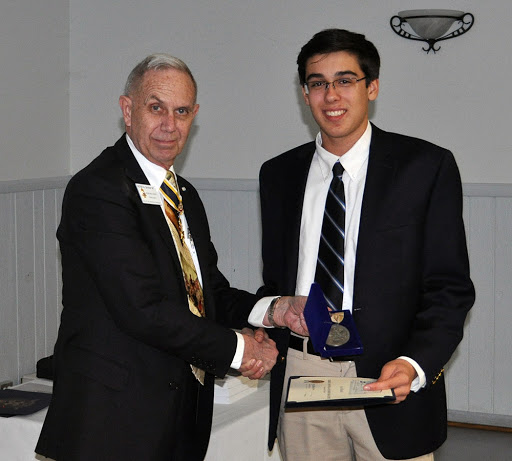 Accepting our Cowpens campaign guidon on behalf of the chapter, pictured below, was Captain of the Color Guard, Compatriot Andy Johnson. 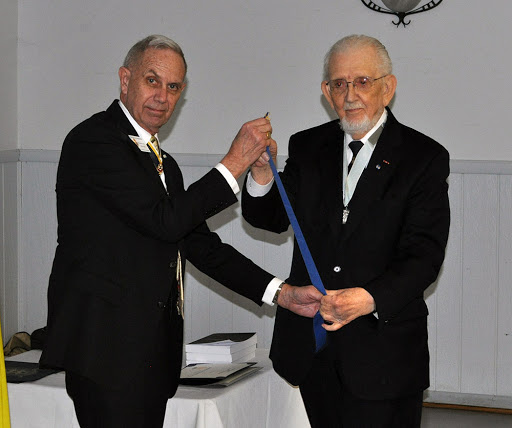 Humbly surprised, below Compatriot Keith David Reeves, who serves as Webmaster for the Chapter as well as the Chair of the Rumbaugh Oration Contest each year, was honored with the Bronze Roger Sherman Medal, conferred by President Davenport. The RSM is conferred to an officer or chairperson compatriot “in recognition of, and in appreciation of, outstanding services rendered to a Chapter.” 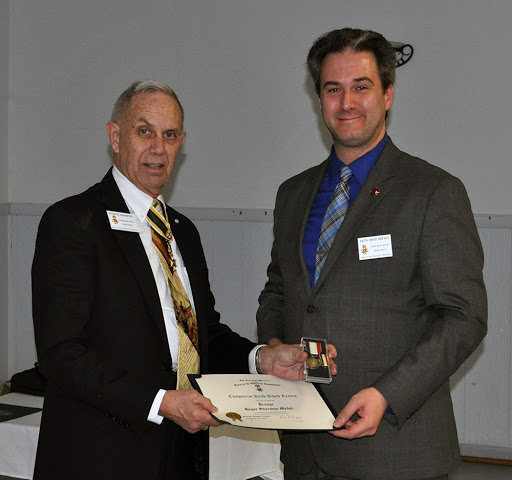 Of particular note at the meeting was the emotional and enthusiastic conferring of the highest award a chapter can confer – the Chapter Distinguished Service Medal – upon Past President Al Lewis. The CDSM may be conferred only by the incumbent President, and only once during his term, in recognition of “conspicuous service to the Chapter during the president’s administration.” As President Davenport indicated in his remarks. Mr. Lewis has been an indispensable, wise, and guiding mentor figure to many in the George Mason Chapter, having represented the Sons of the American Revolution with professionalism and outstanding diligence for many years. This fact is well understood by the chapter, made apparent by the rousing ovation Compatriot Lewis was offered by the gathered. 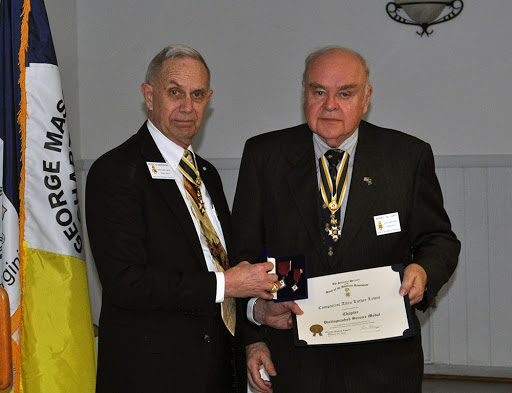 The George Mason Chapter is constantly fortunate and grateful to have in our ranks the Past President of the National Society, Sons of the American Revolution, our chapter Registrar, Compatriot Joe Dooley. Mr. Dooley conferred official certifications of Supplemental Ancestors to Compatriot Wes Clark, who added three Supplemental Ancestors. As the constantly-capable and intrepid Mr. Dooley explained, membership in the SAR is contingent upon a Compatriot’s descent from an identified and genealogically-confirmed Patriot Ancestor who served in the American Revolution. Supplemental Ancestors are additional Ancestors who meet the same academic standard of genealogy for a standing member of the organization. Compatriot Clark has five confirmed Revolutionary ancestors, one of whom was discovered by Registrar Dooley during his diligent research phase of his work on these applications. 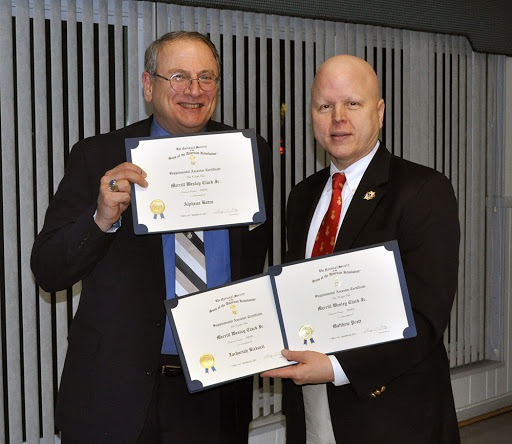 The meeting was held, as is the George Mason Chapter’s custom, at the Fairfax-Arlington Elks Lodge, to whom all present were grateful for their hospitality and service.