In 1725 George Mason was born to George and Ann Thomson Mason. When the boy was 10 years old his father died, and young George’s upbringing was left in the care of his uncle, John Mercer. The future jurist’s education was profoundly shaped by the contents of his uncle’s 1500-volume library, one-third of which concerned the law.

Mason established himself as an important figure in his community. As owner of Gunston Hall he was one of the richest planters in Virginia. In 1750 he married Anne Eilbeck, and in 23 years of marriage they had five sons and four daughters. In 1752 he acquired an interest in the Ohio Company, an organization that speculated in western lands. When the crown revoked the company’s rights in 1773, Mason, the company’s treasurer, wrote his first major state paper, Extracts from the Virginia Charters, with Some Remarks upon Them.

During these years Mason also pursued his political interests. He was a justice of the Fairfax County court, and between 1754 and 1779 Mason was a trustee of the city of Alexandria. In 1759 he was elected to the Virginia House of Burgesses. When the Stamp Act of 1765 aroused outrage in the colonies, George Mason wrote an open letter explaining the colonists’ position to a committee of London merchants to enlist their support.

In 1774 Mason again was in the forefront of political events when he assisted in drawing up the Fairfax Resolves, a document that outlined the colonists’ constitutional grounds for their objections to the Boston Port Act. Virginia’s Declaration of Rights, framed by Mason in 1776, was widely copied in other colonies, served as a model for Jefferson in the first part of the Declaration of Independence, and was the basis for the federal Constitution’s Bill of Rights.

The years between 1776 and 1780 were filled with great legislative activity. The establishment of a government independent of Great Britain required the abilities of persons such as George Mason. He supported the disestablishment of the church and was active in the organization of military affairs, especially in the West. The influence of his early work, Extracts from the Virginia Charters, is seen in the 1783 peace treaty with Great Britain, which fixed the Anglo-American boundary at the Great Lakes instead of the Ohio River. After independence, Mason drew up the plan for Virginia’s cession of its western lands to the United States.

By the early 1780s, however, Mason grew disgusted with the conduct of public affairs and retired. He married his second wife, Sarah Brent, in 1780. In 1785 he attended the Mount Vernon meeting that was a prelude to the Annapolis convention of 1786, but, though appointed, he did not go to Annapolis.

At Philadelphia in 1787 Mason was one of the five most frequent speakers at the Constitutional Convention. He exerted great influence, but during the last 2 weeks of the convention he decided not to sign the document.

Mason’s refusal prompts some surprise, especially since his name is so closely linked with constitutionalism. He explained his reasons at length, citing the absence of a declaration of rights as his primary concern. He then discussed the provisions of the Constitution point by point, beginning with the House of Representatives. The House he criticized as not truly representative of the nation, the Senate as too powerful. He also claimed that the power of the federal judiciary would destroy the state judiciaries, render justice unattainable, and enable the rich to oppress and ruin the poor. These fears led Mason to conclude that the new government was destined to either become a monarchy or fall into the hands of a corrupt, oppressive aristocracy.

Two of Mason’s greatest concerns were incorporated into the Constitution. The Bill of Rights answered his primary objection, and the 11th amendment addressed his call for strictures on the judiciary.

Throughout his career Mason was guided by his belief in the rule of reason and in the centrality of the natural rights of man. He approached problems coolly, rationally, and impersonally. In recognition of his accomplishments and dedication to the principles of the Age of Reason, Mason has been called the American manifestation of the Enlightenment. Mason died on October 7, 1792, and was buried on the grounds of Gunston Hall.

In May of 1981, George Mason Chapter Compatriot Conrad Mook (later President of the Virginia Society from 1983 until 1984) successfully lobbied the United States Postal Service to honor George Mason with an official stamp 🔗. The efforts of this Chapter’s Commemorative Stamp Committee were chronicled in an article in the Washington Post 🔗 that year. 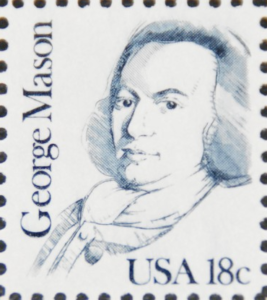