The first Chapter meeting was held at the Hogate’s Arlington House restaurant (pictured below) in Arlington, Virginia on April 1, 1954.

Originally constructed as the Ballston School, the building later became the Thomas Nelson Page school, and, ultimately, Hogate’s Arlington House Restaurant (featuring the addition of the white surrounding portico structure). It was located at 4001 Wilson Boulevard in Arlington, which today is the site of “The View” apartment building and the Kapnos Taverna restaurant. (Photograph courtesy of the Arlington Historical Society.)

Within the first two years, the Chapter began the practice of awarding the Bronze Good Conduct Medal in programs in the local high schools and sponsoring Oration Competition contests. Other youth recognition programs followed and the Chapter consistently now sponsors Orations and Essay competitions, the Bronze JROTC Award, the Eagle Scout Award and frequently participates in the local National History Day programs, presents Flag Certificates, awards to local fire, police, and EMT personnel, recognizes contributions to the Chapter by by both Compatriots and others, and actively supports local veteran programs. The Chapter also has an active Color Guard, with members frequently traveling to events throughout Virginia and other states as far away as New York, Florida, Texas, and California.

During the early years of the Chapter’s existence, the Chapter met frequently at the Fort Myer Officer’s Club, with the Holiday luncheon either at Gunston Hall or the Mount Vernon Inn.

In more recent years, the Holiday luncheon has been held jointly with the George Washington Chapter and celebrated at the Belle Haven Country Club in Alexandria. The Holiday luncheon has traditionally been followed by a reading of the Virginia Bill of Rights and a wreath laying ceremony at George Mason’s grave at Gunston Hall.

The Chapter has contributed significantly to the leadership of the Virginia (VA) Society of the Sons of the American Revolution (VASSAR), with multiple Compatriots serving as the President of the Virginia Society including

At the national level, compatriots Bruce A. Wilcox and Joseph W. Dooley were elected and served as President General of the National Society of the Sons of the American Revolution (NSSAR), Wilcox in 2007 and Dooley in 2013.

Currently compatriot COL Peter M. Davenport serves as the NSSAR Chancellor General, a position he has held since 2019. 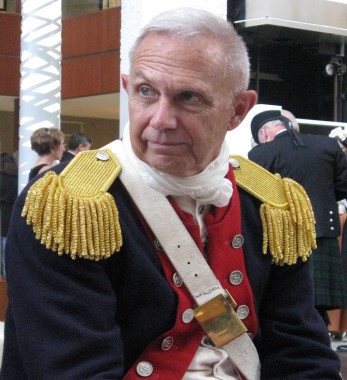 Other compatriots have served as General Officers of the National Society and serve on National Committees.