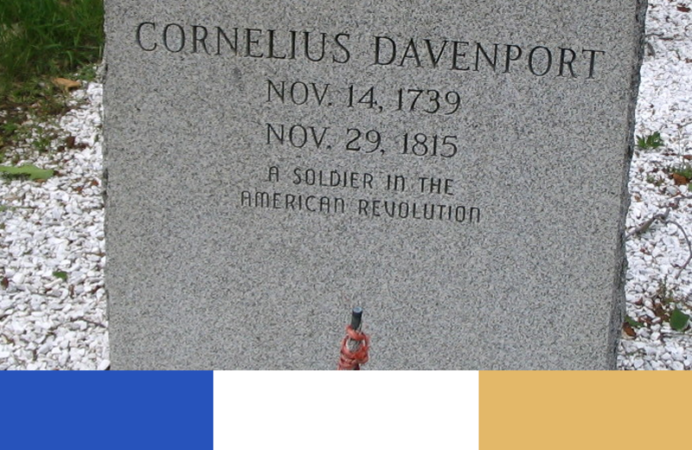 Little detail is available about Cornelius Davenport’s Revolutionary War experience. Although family lore suggests that he may have served as a captain and latter a major and aide to General Washington at Morristown, New Jersey during the winter of 1779-1780, existing payroll records documenting his war time service indicate only service as a Private in the Morris County Militia. If evidence of other service exists, it is elusive indeed.

Cornelius was a prominent and very successful businessman, owning a general store, gristmill, and a number of farms. He also was a partner in Swedelande Forge, an iron working enterprise that made ship’s anchors. In later years, he served as a Justice of the Peace for Morris County, New Jersey. Born in Pompton Plains, New Jersey on November 14, 1739 the fourth son and one of seven children of Humphrey and Elizabeth Heyle Davenport, he died on November 29, 1815 and is buried in the Presbyterian Cemetery at Oak Ridge, Passaic County, New Jersey. Cornelius and his wife Rachel Davenport (his niece and twenty five years his junior) had 18 children, including my great great grandfather Nathan. A stone marker has recently been placed at his grave beside his wife Rachel and indicates his Revolutionary War service.

Little is known about Nathan, other than his marriage to Elizabeth Henderson, with whom he had six children, including my great grandfather Oscar, who left New Jersey and settled in Luzerne County, Pennsylvania. His son Frank was Compatriot Davenport’s father’s father. Frank and his wife Cora Rader Davenport had two children, Mary Adelia Davenport (Nelson Rozelle) and my father, Oscar Malcolm Davenport.