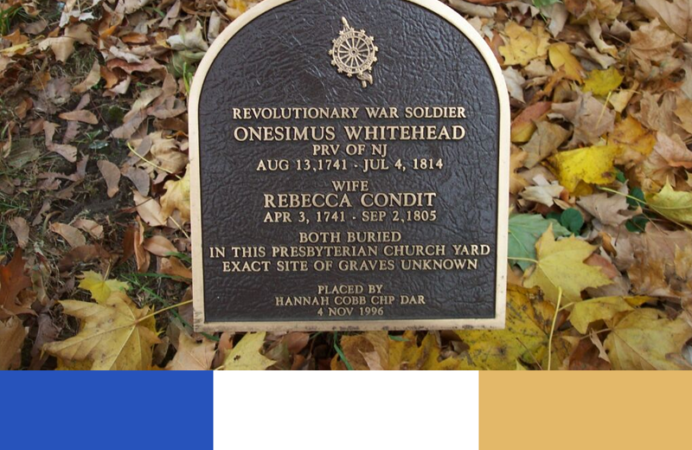 Onesimus Whitehead, the patriot ancestor of Rear Admiral Joel Whitehead, was a member of a family with a strong military tradition since well before the Revolution. The immigrant ancestor of this branch of the Whitehead Family, Isaac Whitehead I, served in the New Haven Colony Militia in Connecticut as early as 1643. The Whitehead family moved westward in 1666 to become founders of the Elizabethtown Colony in New Jersey. The family later moved to Morristown where Onesimus served in the New Jersey Militia when George Washington brought his Continental Army of 10,000 soldiers to encamp during the winters of 1777 and 1779. The latter encampment occurred during the “hard winter” that still remains the coldest on record for New Jersey. Onesimus Whitehead died in Morristown, as fortune would have, on July 4th, 1814.

Most of the Whitehead family in Morristown including Isaac Whitehead IV moved to the Finger Lakes of New York about 1700. The family remained there until about 1826 when they again moved westward to Ohio after the opening of the Erie Canal. The family military tradition continued with the Admiral’s father who entered the Army during World War II and served over 20 years, retiring as a Lieutenant Colonel. His brother Scott is a Marine who recently retired as a Colonel in the Marine Corps Reserve. The Admiral’s Coast Guard service spanned a career of over 38 years, with him retiring at the rank of Rear Admiral after serving as the Commander of the Eighth Coast Guard District in New Orleans.